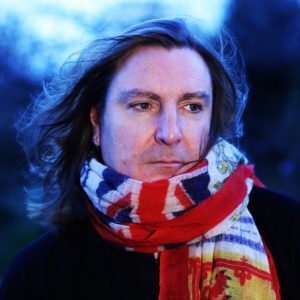 Dan Syrett started his art education at Jacob Kramer which later became Leeds College of Art where he took a foundation degree in art and design, specialising in fashion. He then went on to Liverpool John Moores to take a degree in fashion and textiles this time concentrating on printed textiles. After graduating he very quickly gained an agent in New York, through which he designed for several major fashion brands in both America, France and Spain. At the same time as this, he launched his own label producing tailored garments and t shirts based on his degree show.

While at university Dan started to DJ, primarily in the indie and punk clubs of Liverpool. Which led him to become part of the duo who set up the now infamous dance club Icon. This highly fashionable club night known for it’s themed nights, became notorious throughout the UK for daring to be different. Not just a dance club, more a theme park, with rides, fireworks, actors, room sets and showing risque avant garde films, Icon soon was voted No.1 club in the country by DJ Magazine. Culminating in a commission from the Tate Gallery and Gilbert & George, to run the Opening Party, of the artists first ever retrospective exhibition.

Realising that the nightclub scene was not going to last forever Daniel decided to move to London and return full time to the fashion industry, not as a designer, but as a freelance fashion stylist. Working on mixture of advertising, TV, film and music. His clients included ELLE, All Saints, EMI, Warner Records, BBC, Nokia and London Fashion Week.

During this time he also opened Controversy, his own women’s wear boutique in London. Selling up and coming designer brands from all over the world. The store was voted top fifty boutiques in the UK by Elle magazine and soon became a destination for many of the fashionista’s of London, with Vivienne Westwood being a regular visitor.

After being bought out of Controversy, Dan tried several different careers, Graphic Designer, Teacher and Lecturer. It wasn’t until he moved back North that he found his new venture…… an online magazine. An irreverent, scarcastic, excuse of a fashion magazine called HarrogateConfidential. It was through this he met the owner of the Gascoigne Gallery who became his first art agent.

Gaining a taste for the Art world, Dan opened Workhouse Gallery a contemporary modern gallery, showing the works by Mr Jago, Joe Webb, Swoon, Dan Cimmerman, Sara Pope, Trafford Parsons, Famous when Dead, TONE and of course his own work. Sadly though Dan became ill with liver cancer and this chapter in his life had to come to an end so he could concentrate on getting well.

At the same time as running the gallery Dan was working with his then girlfriend Sara Pope, and together they set up ‘Sara Pope Artist’, the business behind Sara’s now famous lip paintings. As well as the day to day production and studio management, Dan was instrumental in getting Sara the exposure she deserved, by organising press, exhibitions, collaborations with brands and also negotiating her portrait of Pope Francis, being accepted into the Vatican collection.

In 2016 this relationship ended and this together with enormity of his prior health issues Dan became ill again having a breakdown. After a difficult period convalescing, Dan returned to painting, under his own name, creating his current body of work using nail varnish as his medium.

Throughout his career Dan has exhibited his work in several countries including Germany, Italy, France, Holland, USA with many shows in the UK. Press coverage about him and his work has been published in over 200 International/National magazines/newspapers and websites. He also has several pieces of work in the much celebrated counter culture book, ‘High Flyers’ published by Booth-Clibborn Editions.

While at University, Daniel realised the importance of learning from practitioners and therefore has always made time to lecture. He has done so at the following universities, colleges and schools. Liverpool John Moores University, University of Wales in Cardiff, Jacob Krammer School of Art,  Joseph Priestley College & Geoffrey Chaucer Technology College.

Dan separates his time between Leeds and London where he has studios in each location.

He is six foot three with long hair, has no spleen or gallbladder and only half his liver, but he does have all his own teeth.